Today I spent the day getting ready for my house to be painted this weekend!  I'm super, super excited.  We've been living with splotches of paint around the house for at least 6 months or so.  My friend's boyfriend is going to paint the ceiling and walls in the hallway, living room, kitchen, and the open stairwell.  The stairwell is the reason why we are having it done.  I've painted it before, but I feel like a contortionist is getting it done.  He has the equipment so it'll be much easier for him.  ​ 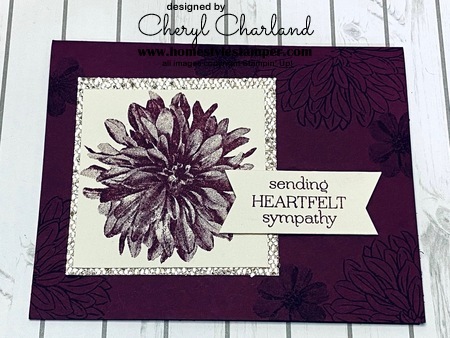 Delicate Dahlias stamp set is the perfect set for sympathy cards.  This one only took me about 15 minutes to make, and that time estimate is on the longer side.  Honestly, it probably took me less than that.

Do you like Blackberry Bliss?  That's the color I chose.  It's now fall, so I figured this color would be good to have on hand.  If you don't want a sympathy card, add another sentiment.  It's that easy.

The Delicate Dahlia is still available unto the end of the month.   You can get it FREE with a $100 order until October 3.  It's coming up quick.  My opinion is that this is the best stamp set in the catalog.

The paper under the dahlia is the Be Dazzle paper.  It was from the SAB catalog and unfortunately, it is sold out.  But, you could substitute it using the Rose and Gold Metallic Speciality Paper.  Or do you have any glitter paper in your stamp room?  Get it out!  Just like any card, a sympathy card can use a pop of sparkle.

What a weekend!  My weekend was spent working a rummage sale.  We did a fabulous job!  It was at my friend's house and we got rid of a lot of stuff!  I had found the sweet spot of the sale.  Every time I would put an item(s) in a certain area, they sold!  Some within 10 minutes being there.  After a while, it was kind of a game to amuse ourselves with. 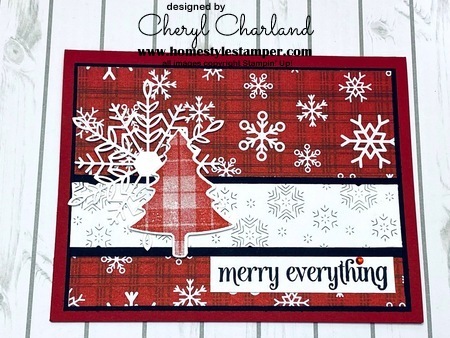 I fell in love with this snowflake paper.  It's found in the Peaceful Prints DSP.  Plus, it's FREE in the SAB catalog.  You can get it until October 3 and then we will be saying good-bye to Peaceful Prints.

When I first saw this long strip  in the Stitched Snowflakes dies, I was kind of baffled.  Then I tried it on a scrap piece and fell in love.  Just look at the row of snowflakes on the Basic White strip.  I love how it looks.  Normally, I just do a single strip, but I need to try doing a few rows of these snowflakes to see how they look together.  Could be fun!

The large snowflake is one from the Wonderful Snowflakes embellishments.  They are white iridescent in color and quite beautiful.  It's adhered by a dimensional just in the center.  You get 24 in a pack.  The only thing is that I wish they were adhesive backed.  But that's life.

The Christmas tree is from an oldie, but goodie stamp set.  Perfectly Plaid.  It is a favorite of mine.  I wonder how much longer it will be around.  Plus there is a punch for the tree!   That's another reason to like this stamp set.  No fussy cutting these trees!

So, from my last blog post, you now know that I love the green pumpkins that you seen in home decor.  I replicated that in my card. 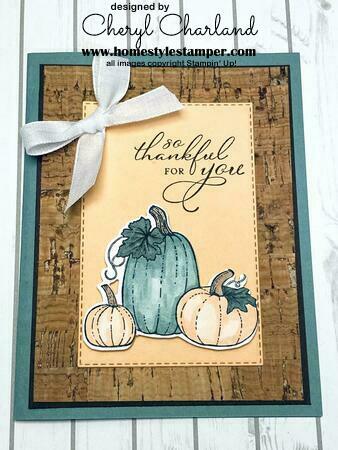 I couldn't help myself to make another Soft Succulent pumpkin.  But, instead of a card, I made a picture for the living room. 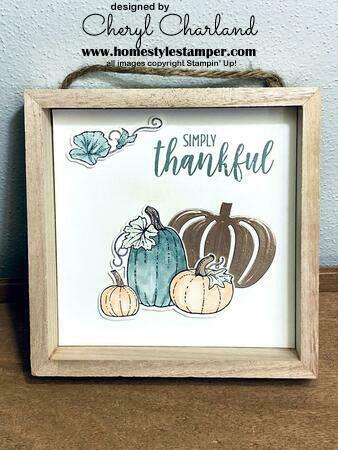 I found this frame at Michael's in the $1 area.  It's roughly 4 inches square inside.  Instead of hanging it on the wall, I'm just going to set it on the end table.

The pumpkins are colored the same as the card, except for the leaves.  I chose to use Soft Sea Foam instead of the Evening Evergreen.  I wanted something a little bit lighter.  The other pumpkin is cut out from Copper Foil Sheets.

In back of the pumpkins, I used the Blending Brushes and brushed some Soft Succulent for depth.  I needed to get rid of some of the white.

You won't believe it, but the picture isn't even adhered to the frame.  Wouldn't it be super cute to be able to change things out for the seasons?  I'm already trying to come up with something for Christmas and then winter.

Monday comes again.  I'm dreading tomorrow.  Dentist appointment.  I like my hygenist and the result sof the cleaning, just hate the process of getting there.  Grin and bear it, right?  It's only twice a year.

I'm in love with how the pumpkins turned out!  The greenish pumpkins are seen everywhere so I had to try making my own with the Pretty Pumpkins stamp set.

There is no doubt in my mind, the perfect green is Soft Succulent.  LOVE it!  The other pumpkins are colored using the Pale Papaya.  I couldn't use the typical Pumpkin Pie.  That would have been too expected and I couldn't do that with the Soft Succulent pumpkin.

For the stem, I used the Bronze Stampin' Blend.  Again, just a little bit unexpected.  It was the first time I used it too!

This was the first time I used the cork dsp.  It does actually feel like real cork!  It's very flexible, just like normal paper.  When I cut it down to size, I went slow with my paper trimmer.  I'm not actually sure if it would tear, but I wasn't taking any chances. 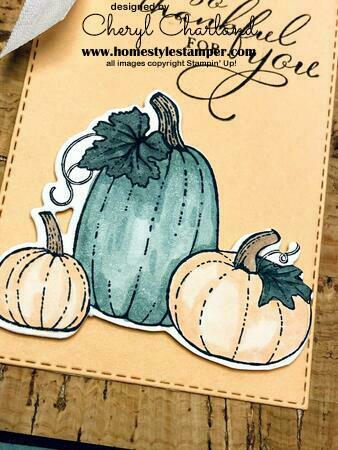 The sentiment is stamped using Early Espresso, the same as the mat around the cork.  It felt good to use that color again since it's been quite a while.  The pumpkin leaves are colored with Evening Evergreen.

I'm thinking about trying these pumpkins in a blue color.  Which blue should I try?

Stampin' Up! has released a new card kit!

Christmas is always so very hectic and a crazy time of year.  This card kit takes away the stress of Christmas card making, with a touch of whimsy on the side. 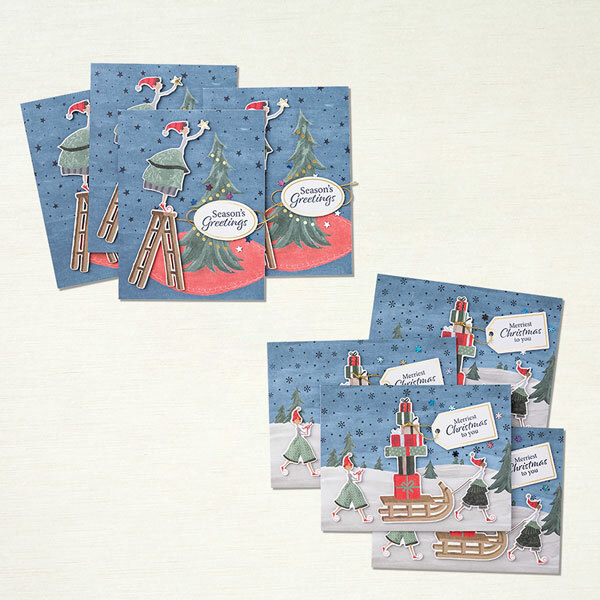 Here are the kit details: 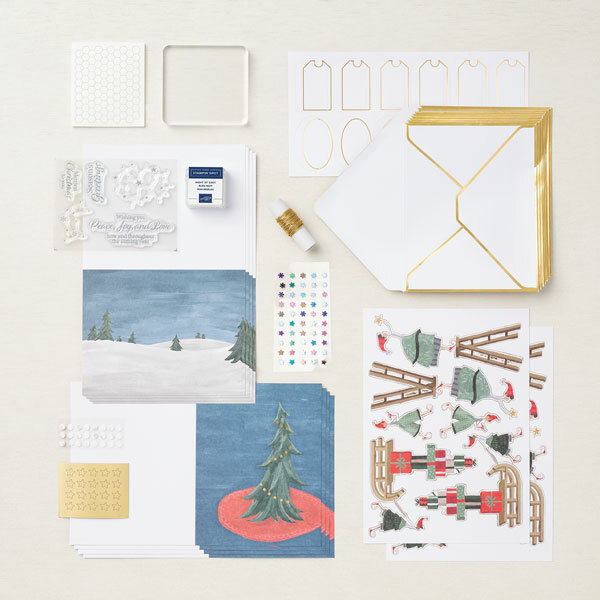 Included is a stamp set exclusive to this kit.  I actually really like the sayings and their fonts.  It's a set that I would considering purchasing. 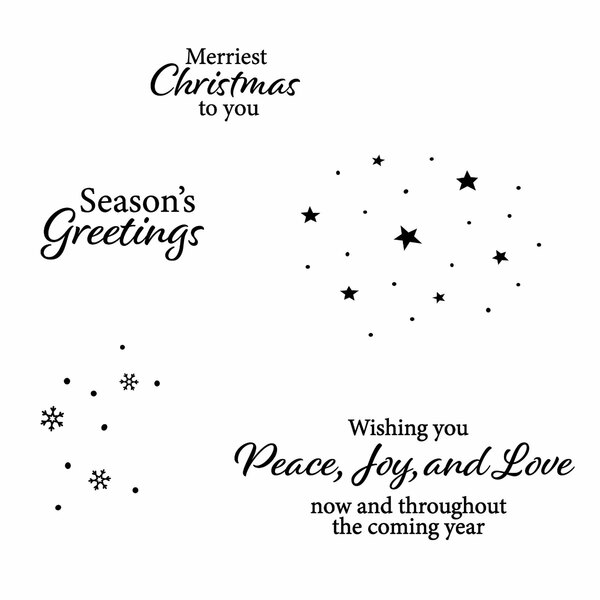 Specifically, this is what the kit includes:

What is so great about the kits, is that the kits make it super easy and includes everything, except for the adhesive.  If you struggle in deciding which stamp set and cardstock to use, then the kits might be the way to go.  The decisions are taken away and replaced with productivity.  These kits can sometimes be put together in an hour's time!  That is completely fabulous!

Being Labor Day weekend, we definitely did labor yesterday.  We did some switching of the furniture.  The downstairs furniture came and out in the garage and the furniture in the storage unit went downstairs.  We are trying to put off the inevitable of purchasing new furniture.  Alyssa came down Saturday and ended up staying overnight to help us on Sunday.  It took the four of us to get it all done.  We did enough yesterday, so today was a day of rest.  We earned it. 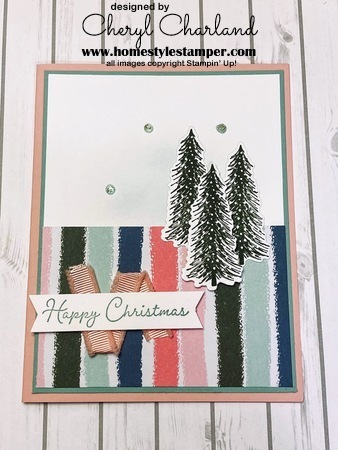 I finally got time to play with Whimsical Trees stamp set.  I'd say it's a Christmas set with a non-traditional twist.  The paper does not scream Christmas at all.  Maybe that's why I like it.

These trees are just adorable in my eyes.  I always wished I could get a set of three tall, skinny trees to decorate my house with. Instead,  I'll have to settle for these trees decorate cards with.

Behind the trees, I did use the blending brushes and Mint Macaron ink pad to color the Basic White paper.  It was just a bit too plain.  That's what the added Genial Gems are for too.

It's also the first time using the Frayed Grosgrain ribbon.  I've seen so many cards using the ribbon with in a zig zag pattern and I finally broke down and copied it.  Unfortunately, mine is just about a half inch too short, but it still looks just fine.  With my luck, if I redid it, the DSP paper would rip and that means starting over.

For the first time in a VERY, VERY long time, I don't have to send any one to their first day of school.  Seeing all the Facebook posts makes me a little sad that this milestone has ended in our household.  Seems like yesterday that we took the girls to the first day of Kindergarten.  On the other hand, I'm very happy they are off the "College Payroll."  Yahoo!   No more college savings, but hopefully we can start to  save for more fun things, hopefully more vacations. 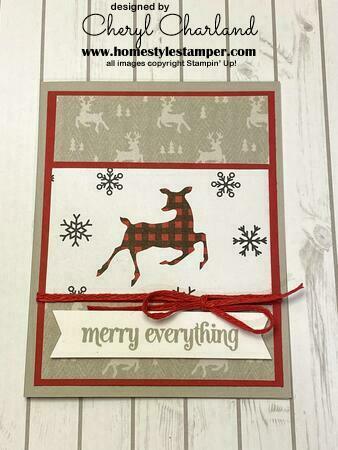 Sometimes we have to let the paper be the star of the card.  That's exactly what I did this this card.  The only part that is stamped is the actual sentiment.

The checked reindeer is printed right onto one of the papers from the Peaceful Prints DSP pack.  If you happen to have the coordinating punch, it could be used on this reindeer.  But, since I don't have it, I just left it alone.  I could have fussy cut it out, but sometimes that is just too much work.

I also love how the other patterned DSP has the same deer image.  Just miniature sized!

The  Real Red Braided Linen Trim is on the Clearance rack!  It's only $4.20.  I'd go grab one before they run out.  It's such an easy trim/ribbon to work with.

I finally was able to get in my stamp room for a while today!  That hasn't happened in a while and it felt good. Life just gets in the way of doing what we want to do and enjoy.  I hate it when that happens. 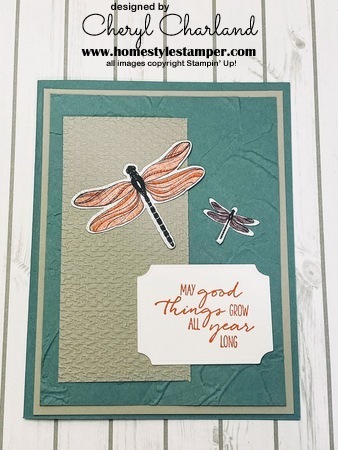 This is one card I did today.

The Challenge:  Use two different embossing folders on a single card.  DONE!

I used the Painted Texture with the Soft Succulent and Tasteful Textile with the Sahara Sand.  I think they look good together.

If you don't have this DSP paper, you can stamp the dragonfly using the Dragonfly Garden stamp set.  I just cheated and used the easy way out this time.  No harm in that  Right?

So, what do you think about using two different embossing folders on a card?  For this one, I like it.