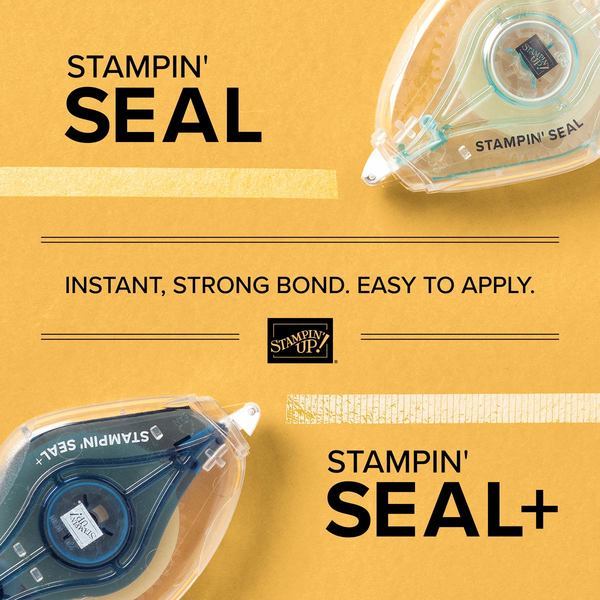 Did you see Stampin' Up! has come out with a new adhesive?  Actually, it's two new adhesives.  And they are exclusive to SU!

The Stampin' Seal is replacing the Tombo Snail, but better.  It will no longer make the long gooey strings Snail would.  It will start and end exactly where you want it to.   I also heard that it is much quieter than regular Snail.  I would call that a side bonus.

Also, both handles are exactly the same.  This means you can switch between the two.

Just tonight, I ordered a Stampin' Seal.  I'll be honest and haven't used Snail in quite a while.  My go-to adhesive is the Multipurpose Liquid Glue. So, I am super curious as to how this adhesive holds.  Maybe if I get brave, I'll do a video and post it.  Goals to work on.

In the meantime, here is a video to watch from SU! about the two adhesives.  It's just over 2 1/2 minutes, so take the time to watch it.

Today the temperature went from 80s and very humid to 60 and rain.  Couldn't get any more opposite in just hours.  Welcome to Wisconsin.  We almost need a jacket if going outside tonight.  Not to mention an umbrella. 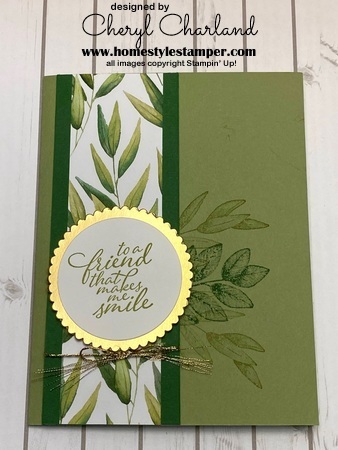 My card club met again last night, the first time in several months.  It was great seeing everyone together again.

It's another Forever Fern card.  The ferns on the card base are stamped in Pear Pizzazz and Garden Green.  The Garden Green was a little bit dark, so make sure you stamp off first.

While you are stamping ferns, don't forget the inside.  I stamped along the left side. It added a surprise element when you open the card.  I stamped in Pear Pizzazz.  Again, it was just a bit dark for what I was looking for, so I stamped off. 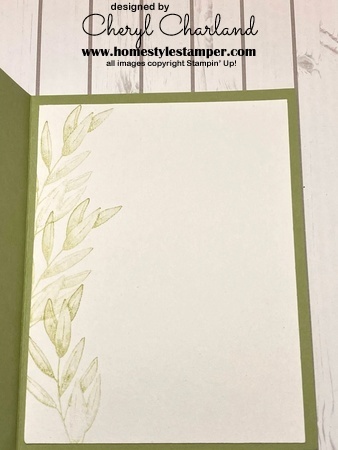 The ribbon is from the Forever Greenery Ribbon pack.  The gold twine is fabulous. It's not just a twine, but had kind of a braid to it.  The only problem is that it frays very quickly.  I can see it making a beautiful tassel.

I finally had two day off from work in a row!  This hasn't happened since March.  It felt soooo good.  Much of the day was spent in my stamp room since we are having club tomorrow!  Last time we met was in February so it'll be great to see the ladies again. 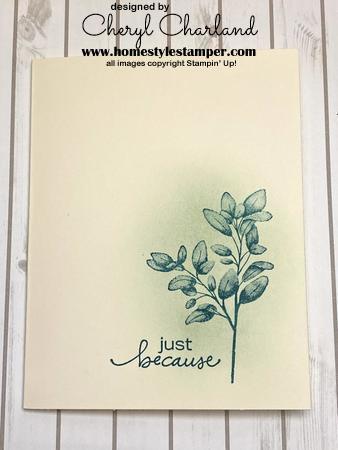 Today is a simple card.  Sometimes, I like them better than the fru fru cards.  You see the actual card, not a bunch of stuff.

The sentiment is from the Lovely You stamp set.  It's the first time I'm using it.  There are so many sentiments I will be using.  It's great.  I also love the fonts.  I like the multiple fonts used.  The flowy are elegant, but still very easy to read.  Sometimes, the fonts are too elegant, they are hard to read.  I avoid those at all costs. Again, sometimes simple is best.

The fern is from the Forever Fern stamp set.  If you need a set for any occassion, I would highly recommend Forever Fern.  You can stamp with any color and use any sentiment there is.

The base is sponged Mint Macaron.  I just made sure the sponged area was larger than the fern stamp.  The fern and sentiment are stamped in Pretty Peacock.  My ink pad is very juice.  Because of this, the fern is stamped off or it would be super dark.

What a beautiful weekend!  The weather actually was the best.  It was warm, but my kind of warm, low 80s.  I spent a lot of yesterday and today weeding in the back.  We got 50 bags of mulch that I have to prep the area for.  It's the length of our property so it's quite a bit to get ready.  I'm hoping that to work on some bags throughout the week.  We'll see. 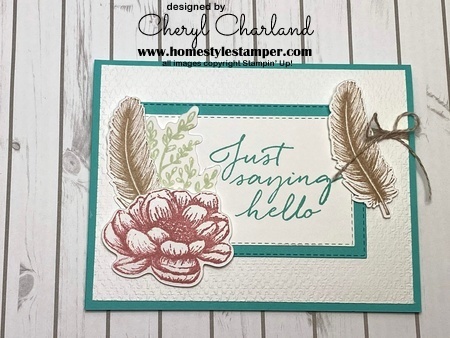 I really like the way this card turned out.  It looks simple and sweet, but in reality, it's not really simple.  Each image is stamped and then cut out by hand.  Sorry about that, but it makes the card.

There's a secret in this card.  The top Whisper White piece that has the sentiment stamped on, is actually cut from the bottom piece of Whisper White on the card.  The Coastal Cabana piece is covering the cut out so you don't see the opening at all.

The Whisper White base is embossed with the new 3D folder, Tasteful Textile.  Love how the pattern is nondescript so it will work in so many kinds of cards.

The linen thread is wrapped around the embossed Whisper White, then adhered to the card base. 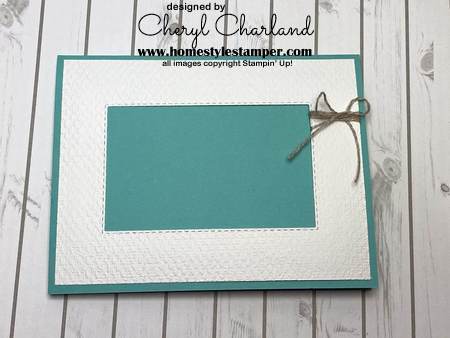 Now, look at the layers on the card.  The feather and flower are both adhered with dimensionals.  I know it's a pain to cut out all the images, but the look can't be duplicated if they are just stamped on the card itself.  If I could make dies for these images, I sure would. 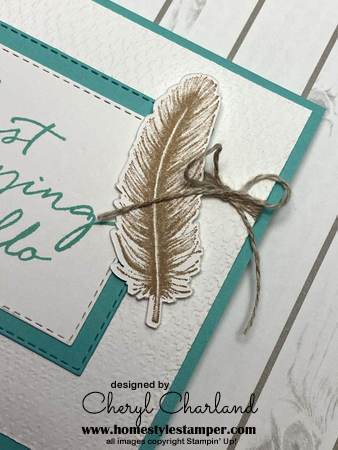 So far, it's hard to say which stamp set from the new catalog is my favorite.  I have Tasteful Touches and Forever Fern.  Both have been so fun to play with.  There are so many more sets that are on my Wish List.  In a perfect world, I would be able to purchase everything at once.  Sigh.  Maybe in the next life.

It's always fun to get the new In-Colors.  But, it's also a little intimidating.

New Colors.  What coordinates with them?

As always, Stampin' Up! is way ahead of that.  They have prepared a Color Coach for these colors. 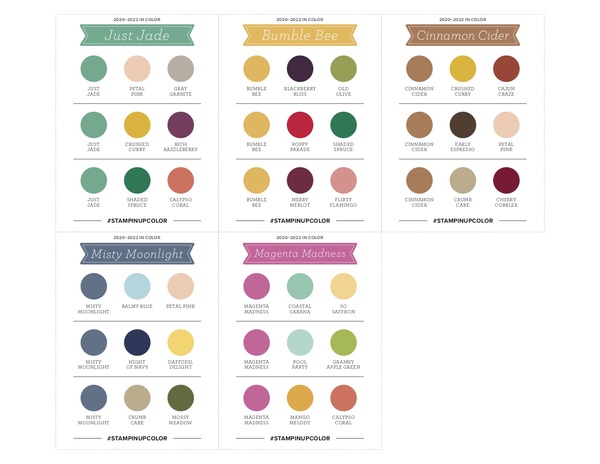 Any other combinations that you think will work?  Let us know!

I am ready for some new colors to shake things up!  New cardstock.  New Ink pads.  New Ribbon.  New Blends.  New DSP.  New embellishments.  It's almost like Christmas in June.  I'm thinking Cinnamon Cider is my new favorite.  But, then again, Misty Moonlight is a close 2nd.

Unfortunately, there is a bit of sad news.  The embossing machines and accessories are not currently available for ordering.  Stampin' Up! does not have an exact date when they will be available.  I will keep you updated when I hear some news.   Here is a list of items that are not orderable.

Do you have a current catalog?  If you don't, let's rectify that.  I'll get one to you.  It's such a good catalog!  With a new catalog also comes with new questions.  I'm here to help with those.  Just contact me. 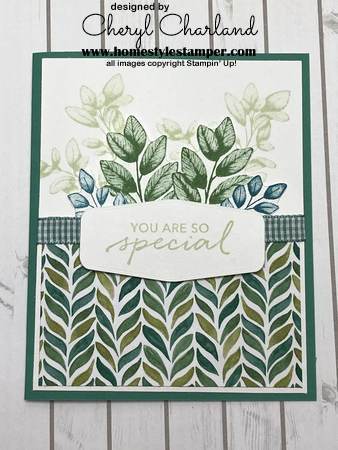 I stamped the ferns in three different colors - Soft Seafoam, Garden Green and Pretty Peacock.   Somehow all the greens work together.  Wouldn't have paired them together.

The DSP is the Forever Greenery DSP pack.   It's all the different greens together.  Including Just Jade, one of the new In-Colors.  The base of the card is actually Just Jade.  I'm liking it already.  I am excited to use this DSP with a pop of color.  Soon I will get to that.

The ribbon is part of the Flowers for Every Season ribbon pack.  It's also in Just Jade! It was the perfect way to hide the seam between the papers.  In the ribbon pack, also comes a ribbon in Whisper White and a Misty Moonlight twine.  All three I can't wait to use.

I finally had a Sunday off!!  And the weather was absolutely gorgeous.  I was one happy person today!  It was a great day to start some small projects.  Two years ago, I picked up a small chest that could be hung on a wall, set on the floor or a dresser.  It was one of those things I thought one of my girls could use when they eventually move out.  So, I started by sanding it down and getting it ready for primer.  I also painted a little shelf and spray painted a vase.  It felt good getting some of these projects started. 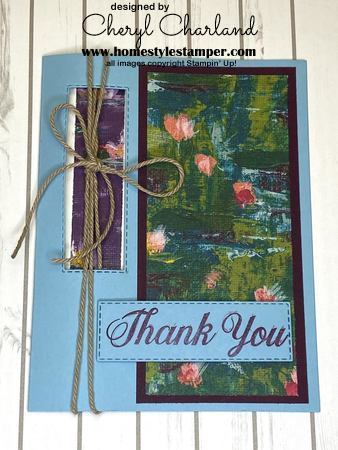 It's my last card using the Daisy Delight Stamp Set and Lily Impressions DSP.  The new catalog is just around the corner!

I tried another cut out window card today. The rectangle is cut right out from the card base.  There is a peek a boo piece of DSP looking through at you.  Take a look in the card inside. 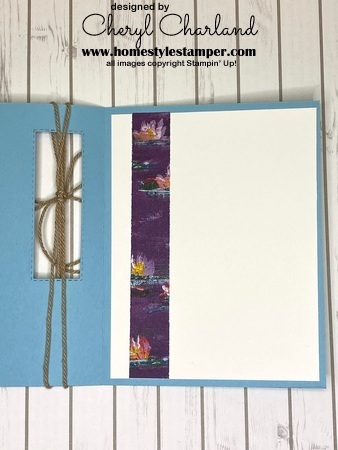 The strip is just added so it's lined up in the middle of the rectangle.  I wove twine from the Nature's Twine pack through the window and around the card.  Just another unexpected detail in the card.

Just to clarify, the stamp set, Daisy Delight, is on the Retirement List.  But, the Daisy Punch is not!  So, don't get rid of it.  Go check out the stamp set that now works with the punch.  It might be on your Wish List.